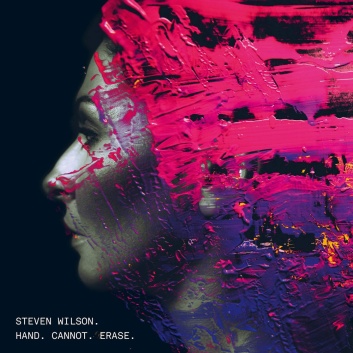 Steven Wilson’s concept fourth album gets a reissue, with an added bluray that opens up the music into 5.1 surround, and along with bonus material, reveals new depth and detail to this highly regarded album. If you’re going to reissue an artist’s album, Kscope show you how to do it in style, at a wallet-friendly price.

It must be hard for a record company when your star performer ups sticks and signs to a bigger label, and Kscope must have felt disappointed when Steven Wilson left for pastures new, even if it was simply for the pragmatic reason of trying to widen his audience. His early endorsement of the label, support for its growing roster of acts and his own growing success helped the label flourish at a point where sales were declining elsewhere.

So you can’t blame Kscope for trying to recoup some of that investment with the occasional reissue, and in this case it’s a repackaged edition of Wilson’s fourth solo album Hand.Cannot.Erase. This was the album that saw him edge away from the more overt progressive rock influences on his previous albums, and begin developing his music into something more streamlined and contemporary.

Hand.Cannot.Erase. was essentially a concept album based around the story of a young woman living in a large city, who dies in her apartment and no one misses her for over three years, despite her having family and friends. The music reflected that urban environment, alternating from shorter edgier songs to more aggressive guitar riffs, and the reintroduction of more electronica into the sound.

Four years on and it still feels an album for the times we live in, and in some places I find it a very emotional experience. The album was well received and so was the tour that followed, and if you’ve not heard any of Wilson’s work before, then this is a good album to start with, as the songs are more direct and easier to engage with on first hearing, compared to the earlier albums.

On its initial release, Hand.Cannot.Erase. was given a quality release with various formats and editions, and at the time, I opted for the hardback digi-book edition which came with the album on CD and a 5.1 surround version on DVD. This version may have been a limited edition as it swiftly disappeared from stores, and subsequent buyers had to be content with a single CD edition. The album was also released in a standalone Bluray version, which included additional material such as alternative takes and mixes.

For this reissue, Kscope have changed the packaging to cardboard digipak, presumably to keep costs down, but the discs are well protected in plastic trays. The booklet has been redesigned too, with a slightly different layout and choice of photographs. But the main upgrade is the bonus Bluray. Having worked through the menu, it looks like they’ve ported over the exact contents from the previous standalone Bluray – the album in 5.1 surround, the album as instrumental versions, radio edits, alternative mixes, and a brief documentary on the album’s recording.

So, if you already have earlier editions, is this reissue worth investing in?

Well, if you originally just bought the single CD edition, then the Bluray is definitely an added incentive. Even if you don’t have a 5.1 set-up, you can still enjoy the stereo mix in a higher quality audio, and you will hear more detail than on the CD.

If, on the other hand, you already have the original DVD version, you might still consider upgrading. I played the 5.1 mix on the DVD version, and then again on the Bluray, and there was a marked improvement in the sound quality. I didn’t need to adjust the volume for the Bluray, but playing it at the same volume as the DVD, everything just sounded clearer and with a wider audio range. The opening bass synth on First Regret bordered on distortion on the DVD, but sounded much clearer and deeper on the Bluray.

Perhaps a better comparison is Home Invasion, where you can hear more clearly the separation between the bass and guitar notes even though their playing the same chords simultaneously. The bass drum pedal kicks deeper, and the phased vocals midway through the song sound far more immersive as they swirl around the room, compared to the DVD version.

The other thing I noticed more clearly on the Bluray, is the way the 5.1 mix locks Wilson’s vocals to the centre speaker, while the instrumental music is spread across the other four speakers. It’s quite an effective way of portraying Wilson as narrator for the story unfolding across the album.

The Bluray also improves the visuals that accompany the music – photographs and images that reveal more of the storyline, along with fictional diary entries – and the latter particularly benefit from the added resolution of Bluray, with the sharpness of the picture making it far easier to decipher the text in those diary pages.

The bonus material might also offer an incentive to go for this edition. The short fly-on- the-wall documentary was included on the original DVD, but the rest of the material was limited to the original Bluray.

Hearing the instrumental versions is an interesting experience, if the vocals have become ingrained into your appreciation of the music, and the alternative takes offer a window into what might have been.

Perfect Life is one of my favourite songs but I sometimes I felt it ended too soon, but having now heard an extended and rearranged take [The Grand Union Mix], I realise that Wilson was right to go with the short version on the finished album.

The bonus material is only available in stereo, but it still sounds excellent from an audio perspective, and most of it is now unavailable in any other format, so if you’re a collector then this edition is now your best option.

As far as I can tell, the CD remains unchanged, with no remixing or bonus tracks, so if you’re content with your original edition, perhaps this upgrade isn’t worth it. But if you have the option to go down the Bluray route then I’d encourage you to try this edition. It’s very reasonably priced and sensibly packaged for the contents [£14 in UK stores], and you’ll dig hearing this album unlock more of its layers.

Alternatively, you could always do something charitable, by buying this reissue and passing your used copy along to someone who hasn’t heard Wilson’s music before.

A similar edition of The Raven That Refused To Sing And Other Stories has also been prepped and is being released by Kscope in a few weeks time. Ghost stories in 5.1 surround, just in time for Halloween!