The definitive book on Tangerine Dream, based on the diaries of the group’s founder and guiding force, Edgar Froese.

I suspect most of you reading this will be familiar with the sound of Tangerine Dream’s electronic rock, spanning fifty years and over a hundred albums (and that’s not including the film soundtracks). But what about the man behind the music?

Edgar Froese arguably WAS Tangerine Dream, having conceived the band and single-mindedly steered it for all those years, as the one constant in an endless spiral of changing line-ups. And yet much of the drama behind the scenes has been kept under wraps, with Froese largely avoiding the media and focusing on the music, pushing his instruments ever further into “the absolute of sound”.

In much the same way as Pink Floyd, Tangerine Dream functioned under a canvas of anonymity, and while Froese certainly courted the music press in the earlier days, under pressure from record labels, this became less the case in the later years, to the point where albums would be quietly released and only the dedicated fans would know about them.

However, Froese kept meticulously detailed diaries of his experiences, and has been described as a “constant observer permanently documenting his own standpoint.” Sadly his intention to publish these diaries stalled when he passed away in 2015. His widow, Bianca Froese-Acquaye, subsequently picked up the fallen baton and brought the project to publication, coinciding with a major retrospective of Tangerine Dream’s period on the Virgin record label last year. (That retrospective took the form of a box set, with a wealth of remastered and unreleased material titled In Search Of Hades, and you can read my review of that set here.)

Given how little authorised biographical material is available on TD, this book presents a rare opportunity to discover the inside story from the man who experienced it all, albeit from his singular perspective.

Froese succeeds for the most part in sharing his observations in a measured fashion, often quoting those who were around him at those particular moments. His tone is direct and honest, at times wincingly so, but never malicious, and I experienced a growing admiration for his integrity as an artist trying to rise above the pettiness of the music business and focus on creativity without compromise, balanced against his responsibilities as a husband and father simply trying to pay the bills.

In this regard, it becomes clear as the book progresses that his first wife, Monika, played a significant role in guiding and supporting him through his career, especially during the frequent business crises that threatened to derail the band as a result of poor professional management.

I found it ironic that the band’s tenure with the Virgin label proved to be their most celebrated, musically speaking, but conversely while album sales grew, so did the band’s unhappiness with the sharp business practices adopted by Richard Branson. On the night of the Royal Albert Hall gig in 1975 – one of the band’s most prestigious moments – Branson offered his Rolls Royce to ferry the band to the venue, and then later billed them for it.

Froese also recounts the troubled preparations behind the scenes for that night’s show – the ill-advised attempt to dress the stage like an exotic jungle, an extortionate demand for cash from the musicians’ union who threatened to close down the entire night, and yet more equipment breakdowns. But if you listen to the recording of that gig (available in the Hades box set), you’d be hard pressed to sense any of these setbacks affecting the band’s performance.

During that period, there was an almost unique telepathy between Froese, Peter Baumann and Christoph Franke, as they improvised and created their music, each building on the others’ ideas and weaving their own contribution into the musical collage. The music was invariably improvised between the three players over the duration of each set, and no two shows were ever the same.

The synthesisers were very susceptible to shifting temperatures, and could suddenly crash, or drift out of key. So even after a sound check, the band would find themselves opening each show by re-tuning each piece of equipment individually until each synthesiser was locked into the same precise frequency. Ironically, audiences mistook this level of concentration for indulgent aloofness, but the three musicians had to be confident that their equipment was operating at peak performance before they were confident enough to begin the show – and give the audience what they had come to hear.

The diaries go into fascinating detail as the band experimented in the studio with the each new advance in electronic technology, and again, I felt a renewed respect for the patience and persistence of these musicians as they spent long hours trying to create new sounds and then find a way to merge them into music for the next album.

I particularly enjoyed the account of the recording sessions for the Stratosfear album, as the band struggled with creative blocks and equipment breakdowns, not to mention racing against the clock as a certain David Bowie was impatient to use the same studio for his next album. Froese and Bowie became good friends during the latter’s extended stay in Berlin, and reading these diaries you get the feeling of a meeting of minds between these two pioneers.

Bowie was particularly fascinated by Froese’s solo album Epsilon In Malaysian Pale, which inspired him to pursue a more electronic sound himself, and it must have been quite something to witness Bowie, Froese, Brian Eno and Tony Visconti collaborating on the music that would become the Low album. (In the end Froese, bowed out by mutual agreement as he felt that his guitar technique was limiting the music’s potential.)

Although this book is as near a definitive account of Tangerine Dream’s career as you’re likely to get, it does come with caveats. The seventies and early eighties are well documented, but the story tails off beyond those periods, so there’s very little about the later line-ups, which I found disappointing given the number of photographs included from the 2000s.

Also, because the book is a series of diary entries rather than a linear story, there are frequent moments of repetition, but this can work to the reader’s advantage if you’re choosing to dip in and out of the book and need a brief refresher without struggling through the index. Each chapter is titled, so it’s easy to skip across the different periods and albums.

As you can see from the image below, the book is predominantly text, and you certainly get your words’ worth. The centre of the book is devoted to 42 pages of photographs, and I suspect many of these portraits have not been widely published before. They offer a nice counterpoint to the weighty passages of text, and offer a further insight into Froese the person, rather than the musician. There is also a poignant section at the end of the book, where friends, colleagues and fans offer their own personal tributes.

Force Majeure is a weighty tome, and comes with a hefty price tag in its hardback edition (£40 via the Burning Shed website), which may deter some fans, but perhaps it’ll be re-published in paperback format at a reduced price. The hardback version certainly feels classy, and the printed paper is of high quality, as is the glossy section with the photographs. 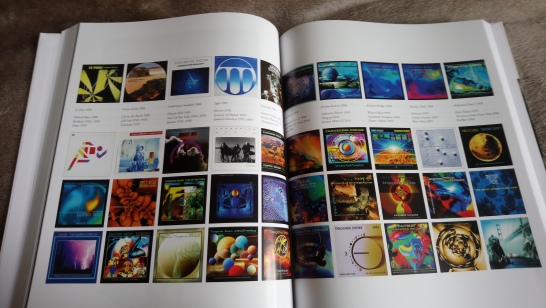 Long term TD fans will certainly get a lot out of this book, and may even be inspired to revisit their favourite albums with a new-found sense of appreciation. The casual fan may be daunted by the price tag, but I’d simply say that this is one of the most engrossing books I’ve read for a while, and a valuable insight into the challenges an artist faces in striving to create something original and enduring.